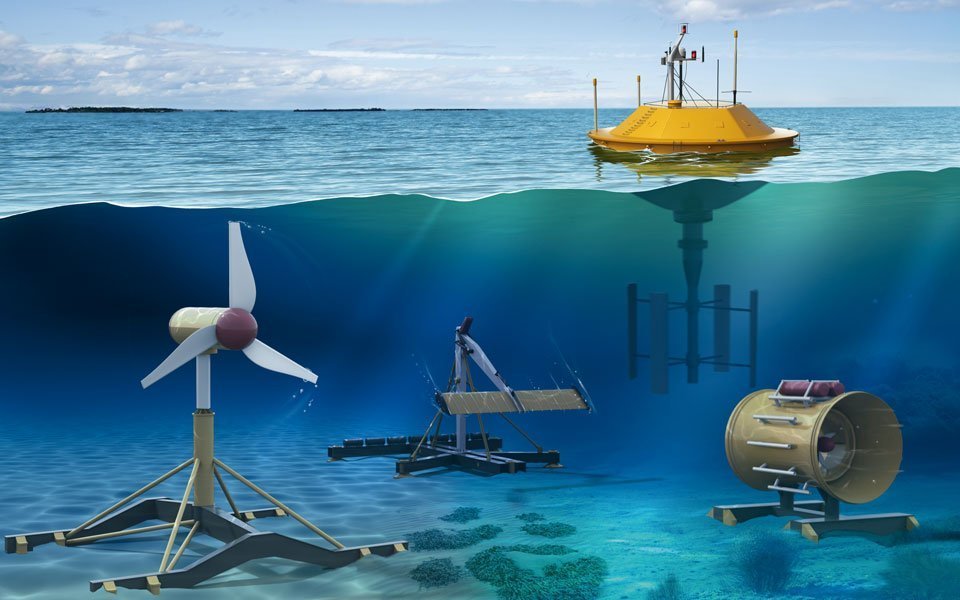 An estimated $190 billion of investments in new energy supplies over the next two decades will be earmarked for tidal, current and wave-based technologies. The International Energy Agency estimates that tidal power could generate 200 TW per year, while wave power could produce 8,000 TW. The output could reach according to some estimates 80,000 TW. Within one decade, the United States could produce 10 GW of wave power and 3 GW of tidal power. The potential in the US once captured would be enough the produce six percent of U.S. electrical demand. However, most ocean energy technological development originates in Europe, supported by the cap-and-trade policies that make all renewable energies a nascent sector. The regions with the greatest potential for wave power includes Alaska, the North Sea, North Eastern Canada, the Eastern Cape of South Africa, Southern Brazil and Argentina, Japan, Indonesia and Southern Australia. The regions with a strong potential for harnessing tidal energy includes the Bering Strait, the North East of Brazil, the Great Lakes of North America, North Cape from Norway to Russia, from the Korean Peninsula to the Chinese Sea, North Western Australia and New Zealand. The only country that has successfully implemented a tidal wave energy system is France. The La Rance station in Brittany generates each year 240 MW of power since its construction in 1966. The UK is pioneering wave power at the European Marine Energy Centre (EMEC). The US pioneered in Hawai’i another form of ocean-based energy: the harnessing of temperature differences known as Ocean Thermal Energy Conversion (OTEC). A broad portfolio of companies have embarked on designing and building equipment that overcomes the massive environmental and climatological challenges these energy generating facilities encounter. Ocean Power Delivery (Scotland) has joined with Vattenfall (Sweden), Enersis (Portugal), E.On (Germany). Theoretically the different devices could extract 40MW of power per kilometer of coast when the waves are gentle (1 meter) and 1,000 MW per kilometer of coast where the waves reach 5 meters.

Water is a liquid and therefore wave and current energy contains roughly 1,000 times more kinetic energy than wind. This permits smaller devices to produce more power. In addition, sea waves are produced around the clock. The innovations in mechanical design and maintenance on one hand, and the reduction of environmental impact on the other hand represent a challenge to engineers since waves and currents have a very strong force at a slow speed. The generation of electricity requires a high speed. A second limiting factor for the engineers are the harsh weather conditions. Any floating or submerged device tethered with cables and chains to the bottom of the sea has to withstand the pounding of the storms and even withstand tsunamis. Tim Finnigan, an adjunct professor at the University of Sydney with a degree in environmental fluid dynamics, observed how giant kelp moves with the rhythm of the currents and the waves. He realized that giant kelp (Laminaria spp) grows as fast as half a meter a day, sometimes reaching up to 80 meters. Better even, kelp moves with the currents which bring a wealth of nutrients. When a storm or a tsunami hits, these huge underwater forests simply lay flat on the bottom of the ocean. Prof. Finnigan studied the fluid dynamics of kelp movements and converted these into mathematical models which served as the design parameters for an electric generator. His approach overcomes both speed and tethering challenges. His design is based on a geometry borrowed from proven systems in Nature. This is one of the core principles of The Blue Economy. On top of that, his patented bioWave generators move in the ocean’s ecosystem as if it were kelp. His devices have no rotary movements that resemble fans or mills, nor creates barrages that stop the flow of nutrients which causes siltation, thus not posing any known danger to aquatic life. Perhaps the most important feature is that bioWave moves with the flow of the currents and the waves. Instead of bracing the mechanics against the excessive forces created by the unavoidable storms, Prof. Finnigan succeeded in adopting the ultimate safety system: when a tsunami hits the area, the bioWave will lay flat on the bottom just like kelp does. Whereas wave and sea current based power has long been considered uneconomic since it cannot withstand the harsh marine environment, Prof. Finnigan has learned his lessons in the field and borrowed the intelligence from the largest algae species in the ocean.

Prof. Finnigan went on to create the Sydney-based company BioPower and complemented his insights on how kelp moves with observations and the geometrical models of how sharks, tuna and mackerel propel themselves. This lead to a portfolio of patents registered under the brand names BioWave and BioStream. Projects are under development in Australia, Spain and the United States turning this approach to harnessing waves and currents into a most commercially relevant technological breakthrough. Since the system is modular, it permits units of 250, 500 and 1,000MW to be installed as a farm, close to the shore, without any visual impact, underwater stress on the ecosystem and excessive tethering on the ocean floor.

The market development has only just begun. The propensity to invest in off-shore facilities is large and compared to the complexity of wind farms, BioPower has the simplicity and the safety. The most obvious commercial application is turning small island communities selfsufficient placing bioWave installations in front of the site that requires electric demand. Since the supply is guaranteed and are as reliable as the orbit of the moon and the law of gravity, this source of energy could also provides baseload energy. Biowave and bioStream energy supply is so certain that a farm of a dozen takes a population of 10,000 off the grid and no one will even have to install light switches. The supply of energy will have evolved from scarcity provided by polluting diesel generators to an invisible, smell-free and permanent flow.